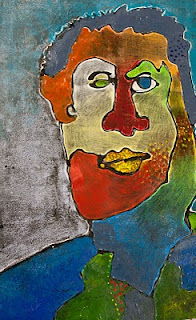 After the glue has dried and you have added the layer of ink with your brayer, it is time to add color. Using either pastels, colored pencils or acrylic paint (or a combination of all three), add color to your artwork. Work around the black glue lines with your materials.

Colored Pencil: Prismacolor colored pencils have vibrant and saturated color. These pencils are very expensive, so take great care of them. Do not use the electric or wall pencil sharpener on the Prismacolors. Only use the oblong black sharpeners or the little silver sharpeners.

Colored Pencil will allow some of the black ink layer below to shine through. Blend layers of different colors for more depth in your colors. 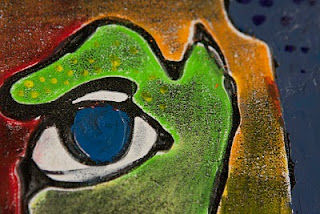 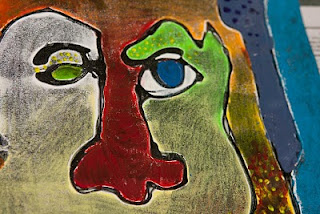 Pastels: Pastels have a softer feel. Layering different colors with pastels can also create depth and visual interest. You have the option of leaving the layer of pastels as they are laid on or blending it in with your finger. Please keep in mind that pastels need a spray fixative when finished. This sometimes mutes colors or makes the pastels blend in with the ink (in this project). 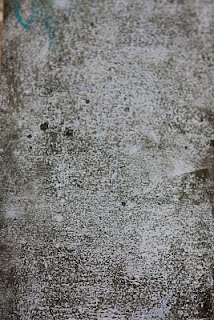 Acrylic Paints: Acrylic paints bring the water-soluble quality of the block ink out. You will notice that the ink gets brought to the surface if your paintbrush has too little paint on it. Pput a lot of acrylic on your brush and pay attention to your brush strokes. 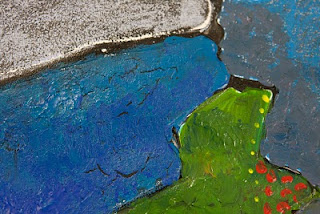 Remember: You MUST use at least one set of complementary colors. You MUST use bright colors in at least 2/3rds of your image. Use warm colors near or on your focal point. Wear your aprons and clean up thoroughly please! 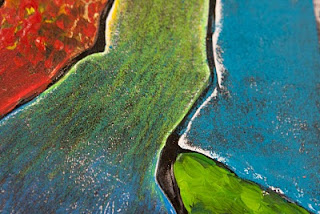 “Guernica, the oldest town of the Basque provinces and the center of their cultural traditions, was almost completely destroyed by the rebels in an air attack yesterday afternoon. The bombing of the undefended town far behind the front line took exactly three quarters of an hour. During this time and without interruption a group of German aircraft – Junker and Heinkel bombers as well as Heinkel fighters – dropped bombs weighing up to 500 kilogrammes on the town. At the same time low-flying fighter planes fired machine-guns at the inhabitants who had taken refuge in the fields. The whole of Guernica was in flames in a very short time.” - The Times, April 27, 1937.

The Spanish government had asked Picasso to paint a mural for the Spanish pavilion at the Paris World Exhibition. He planned to depict the subject “a painter in his studio”, but when he heard about the events in Guernica, he changed his original plans. After numerous sketches and studies, Picasso gave his own personal view of the tragedy. His gigantic mural Guernica has remained part of the collective consciousness of the twentieth century, a forceful reminder of the event. Though painted for the Spanish government, it wasn't until 1981, after forty years of exile in New York, that the picture found its way to Spain. This was because Picasso had decreed that it should not become Spanish property until the end of fascism. In October 1937, Picasso also painted the “Weeping Woman” as a kind of postscript to “Guernica”.

In 1940, when Paris was occupied by the Nazis, he handed out prints of his painting to German officers. When they asked asked him “Did you do this?” (referring to the pictures), he replied, “No, you did”. Whether those world-reknowned military brains were simply unable to perceive the symbolism of the picture, or whether it was Picasso's fame that stopped them from taking any action, the painter was not arrested and went on working. During the war, he met a young female painter, Françoise Gillot, who would later become his third official wife.

With his Charnel House of 1945, Picasso concluded the series of pictures that he had started with “Guernica”. The connection between the paintings becomes immediately obvious when we consider the rigidly limited color scheme and the triangular composition of the center. However, in the latter painting, the nightmare had been superceded by reality. The Charnel House was painted under the impact of reports from the Nazi concentration camps which had been discovered and liberated. It wasn't until then, that people realized the atrociousness of the Second World War. It was a time when the lives of millions of people had been literally pushed aside, a turn of phase which Picasso expressed rather vividly in the pile of dead bodies in his Charnel House.

Article is by Charles Moffat from www.arthistoryarchive.com


Question for The Miz Art Topic Number One:

How did Picasso's artwork comment on and/or document the atrocities of World War II? 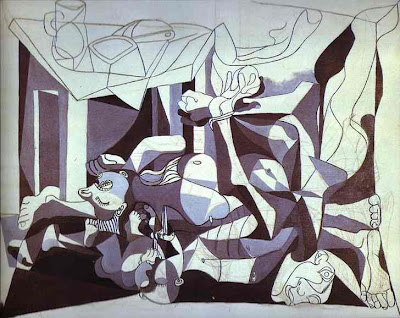 
Original article may be found at: