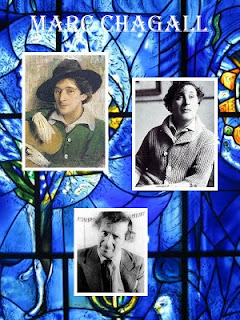 "Marc Chagall was born in 1887 to a poor Jewish family in Russia. He was the eldest of nine children. Chagall began to display his artistic talent while studying at a secular Russian school, and despite his father’s disapproval, in 1907 he began studying art with Leon Bakst in St. Petersburg. It was at this time that his distinct style that we recognize today began to emerge. As his paintings began to center on images from his childhood, the focus that would guide his artistic motivation for the rest of his life came to fruition.

In 1910, Chagall, moved to Paris for four years. It was during this period that he painted some of his most famous paintings of the Jewish village, and developed the features that became recognizable trademarks of his art. Strong and bright colors began to portray the world in a dreamlike state. Fantasy, nostalgia, and religion began to fuse together to create otherworldly images.

In 1914, before the outbreak of World War I, Chagall held a one-man show in Berlin, exhibiting work dominated by Jewish images. During the war, he resided in Russia, and in 1917, endorsing the revolution, he was appointed Commissar for Fine Arts in Vitebsk and then director of the newly established Free Academy of Art. In 1922, Chagall left Russia, settling in France one year later. He lived there permanently except for the years 1941 - 1948 when, fleeing France during World War II, he resided in the United States. Chagall's horror over the Nazi rise to power is expressed in works depicting Jewish martyrs and refugees.

In addition to images of the Jewish world, Chagall's paintings are inspired by themes from the Bible. His fascination with the Bible culminated in a series of over 100 etchings illustrating the Bible, many of which incorporate elements from folklore and from religious life in Russia.

Israel, which Chagall first visited in 1931 for the opening of the Tel Aviv Art Museum, is likewise endowed with some of Chagall's work, most notably the twelve stained glass windows at Hadassah Hospital and wall decorations at the Knesset.

Chagall received many prizes and much recognition for his work. He was also one of very few artists to exhibit work at the Louvre in their lifetime."


This is a very short biography. I encourage students to read more about Chagall and his fascinating artwork. Some helpful websites about Marc Chagall: 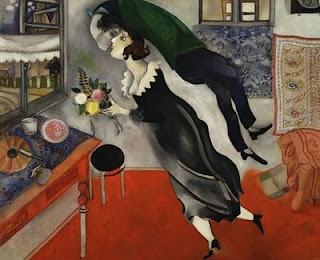 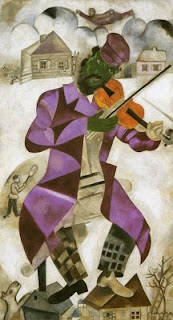 "The Green Violinist" by Marc Chagall 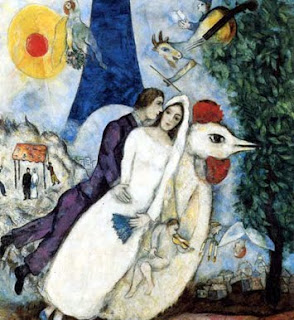 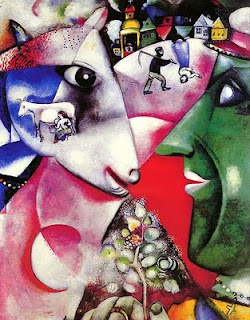 "I and the Village" by Marc Chagall

"The dignity of the artist lies in his duty of keeping awake the sense of wonder in the world. In this long vigil he often has to vary his methods of stimulation; but in this long vigil he is also himself striving against a continual tendency to sleep."
- Marc Chagall
Posted by Miz Burnell (Rapp) at 9:57 AM No comments: