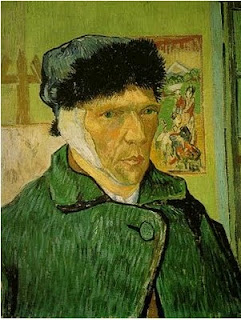 ~ Self Portrait by Vincent van Gogh

Gauguin's relationship with van Gogh was rocky. Gauguin had shown an early interest in Impressionism, and the two shared bouts of depression and suicidal tendencies. In 1888, Gauguin and van Gogh spent nine weeks together, painting in the latter's Yellow House in Arles. During this time, Gauguin became increasingly disillusioned with Impressionism, and the two quarreled. On the evening of December 23, 1888, frustrated and ill, van Gogh confronted Gauguin with a razor blade. In a panic, van Gogh fled to a local brothel. While there, he cut off the lower part of his left ear lobe. He wrapped the severed tissue in newspaper and handed it to a prostitute named Rachel, asking her to "keep this object carefully." Gauguin left Arles and never saw van Gogh again. A few days later, van Gogh was hospitalized. ~ Wikipedia

A new study claims Vincent van Gogh may have made up the story to protect painter Paul Gauguin who actually lopped it off with a sword during an argument.

Self Portrait with Bandaged Ear, 1889 by Vincent van Gogh (1853-90)
German art historians say the true version of events never surfaced as the two men both kept a "pact of silence" – Gauguin to avoid prosecution and van Gogh in a vain attempt to keep a friend... ~ By Henry Samuel 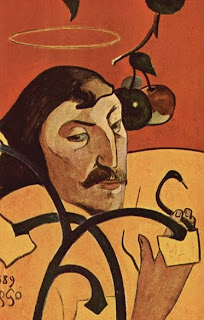 ~ Self Portrait by Paul Gauguin

Another explanation is that van Gogh was influenced by the bullfights that he saw in Arles. The tradition is that a matador would after a fight cut off the ear of the bull and present it to a lady of his choice. This seems that van Gogh was confused in his own head, and thought of himself as both the winner (matador) and the loser (bull) in the same time, and thus cut off his own ear, and just like the matador does, presented it to Rachel, a lady of his choice (Runyan).

There is a scene in the Bible, in which Simon Peter cut off the ear of Malchus. This scene van Gogh actually tried to paint in the summer of 1888, the same ear he cut off his ear. It was also mentioned in his letter to his sister in October the same year. During a psychotic attack, Vincent maybe tried to act out this scene, using himself for both the roles of the victim and the aggressor (Runyan).

Van Gogh might have very likely experienced very vivid auditory hallucinations at the time. He also believed that such hallucinations might have been due to a disease of the nerves in the ears. Thus it is credible to believe that during a psychotic attack, he could have felt that cutting off his ear would disconnect these nerves and thus free him from the disturbing sounds he was hearing (Runyan).
~ http://blogs.princeton.edu/wri152-3/f05/skrstic/other_theories.html
Posted by Miz Burnell (Rapp) at 11:51 AM No comments: